When IRS Environmental appears in the news, you can always be sure it is for the right reasons. Here you can see some of the times we have been featured. 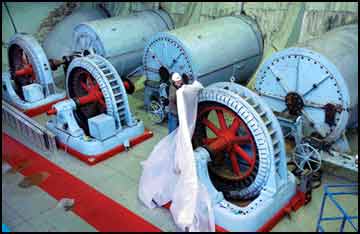 Reprinted from The Missoulian

MILLTOWN - Workers finished sealing the interior of the Milltown Dam powerhouse Tuesday before starting to remove its lead-based paint.

The paint's removal is another step toward the upcoming demolition of the 100-year-old powerhouse, which provided Missoula's first electricity.

Dry ice is being used to blast away the paint, which will be removed as hazardous waste as part of the Superfund cleanup of Milltown Reservoir.

Lead-based paint has been shown to cause respiratory and other health problems.

Using pressurized dry ice creates less dust than sand-blasting. Air quality will be monitored inside and outside the powerhouse during the paint's removal, said Ben Johnson, project engineer with Envirocon of Missoula, the general contractor.

A subcontractor, IRS Environmental of Spokane, is removing the paint.

The brick-and-concrete powerhouse, which stopped generating electricity several years ago, was recently tested for lead-based paint, asbestos and polychlorinated biphenyls.

The tests were required before the powerhouse could be demolished along with the dam and spillway to restore the confluence of the Clark Fork and Blackfoot rivers.

Lead-based paint was found in the powerhouse's upstream wall and floor, Johnson said.
Those areas have been sealed in plastic tarps, along with the building's generators, other equipment, windows and doors.

Asbestos found in the powerhouse's roof also will be removed before demolition, Johnson said.
The control panel, a generator and some other equipment have been removed as part of a plan to build an interpretive center near the dam's current site about seven miles upstream from Missoula.

Removing the building's lead-based paint will take about four weeks.

After that, the rivers will be diverted into bypass channels while the demolition of the powerhouse, dam and spillway is completed.

Demolition could start in late November and will be completed in stages over the next year. It will be done mostly by heavy equipment. Some dynamite may be used.

Most of the debris will be removed from the site, although some concrete rubble will remain in the river channel at the site of the century-old powerhouse.

The rubble will be capped with five feet of river gravel. No rubble with lead-based paint will be allowed in the river, Johnson said.

In other areas of the cleanup site Tuesday, workers continued to remove contaminated sediment from the reservoir.

The sediment will be used to cover nearly 1,000 acres of mill tailings left from a century of smelting ore in Anaconda. The goal is to cap the toxic material under fields of grass.

The Superfund site's remediation and restoration is scheduled to be completed by 2011.

The 6.6 million cubic yards of contaminated sediment in Milltown Reservoir were carried downstream during a tremendous flood in 1908. The high water washed mine and smelter tailings from about 100 miles of Silver Bow Creek and the upper Clark Fork, much of which settled in the reservoir behind Milltown Dam.

Over the years, more sediment settled out on top of the most contaminated material.
Atlantic Richfield Co. merged with Anaconda Copper in 1979 and inherited the task of cleaning up mine and smelter tailings that extended from Butte and Anaconda along the upper Clark Fork River to Milltown Reservoir just east of Missoula. Arco has since merged with BP Amoco.